The Powerful Magic of a Simple Notebook

For the past few years, my writing process has become increasingly digital. I like technology and use software for just about every aspect of writing–from collecting ideas to researching to writing.

But I have a notebook. It’s physical, not digital. It’s not a little palm-sized one to carry in my pocket or purse. (I used to do that years ago, but nowadays, for those kinds of notes I use Evernote or OneNote on my computer and phone.) No, this notebook is standard 8.5 x 11.

I realized just recently this notebook is magical for me–if I open it, thoughts automatically start to come to me. It’s become Pavlovian. I realized it makes me happy to even glimpse, touch, or open this notebook.

I use it in a specific way–for brainstorming about specific scenes, plot, problems, sequences, characters, etc. and for generally thinking more deeply about the WIP, away from the words and the screen.

My notebook isn’t special; it’s not bound in leather or expensive or handmade. I considered the Levenger Circa or Staples’ Arc binders, which are popular with many writers, but they felt a little restrictive and expensive.

My notebook is ordinary, inexpensive, and practical. It’s a binder made by Five Star Mead.

I have several. I prefer red or purple covers. (One of my favorites is one with a pretty flowered fabric spine that, alas, is no longer being produced.) 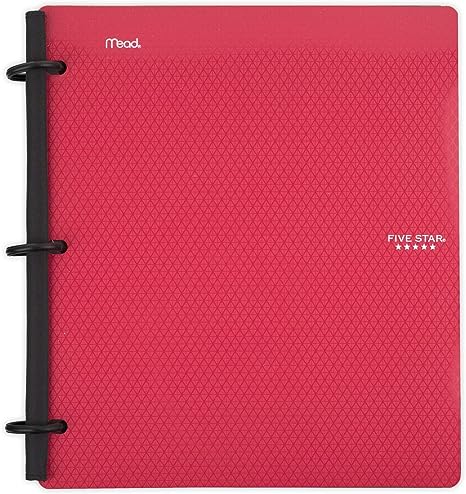 It has plastic binder rings and a flexible plastic cover that’s lightweight, waterproof, attractive, and easy to clean. Most important is that it always opens flat and you can fold it over on itself like a spiral notebook.

The notebook takes standard 8.5 x 11 paper which is cheap and ordinary and encourages me to be profligate rather than miserly, and to freely, messily, fully brainstorm a topic. Just recently I discovered Mead Five Star reinforced filler paper which has bigger holes so it turns better on the rings.

My handwriting is not neat and tiny; it’s purposely messy, but I do like pens with brightly colored ink. The standard dimensions mean I don’t feel cramped and limited by the small size of a palm-sized notebook.

I’m not precious about these notebooks. They aren’t journals. I don’t use an organization scheme for the brainstorming in this notebook. I don’t put in sections or an index, but I could. I might in the future. Currently I don’t usually refer back to notes, or at least not over long periods of time. Usually it’s daily/hourly/weekly problem-solving that I incorporate into current writing within a week or so, though I do occasionally enjoy leafing through the binder’s pages out of sentimental nostalgia.

Now that I realize how magical this notebook is, I think I might start using it even more systematically–open it at the beginning of every writing session and make some notes before I start writing.

I’ve thought about using an app that would allow handwriting on my ipad or phone, but in the case of brainstorming, I find there’s no substitute for the magic of pen and paper!

How I spent the pandemic: MA in Crime Fiction Writing at UEA

I am not the kind of writer who gets to a certain point in their development and decides that they’ve learned enough, that they’re good enough. I enjoy studying the craft of writing and continuing to improve as a writer. But as I become a more knowledgeable and well-trained writer (a process which took many years), it becomes increasingly hard to find appropriately advanced learning opportunities.

In 2015, I stumbled on the announcement of a new low residency, part time creative writing degree– the MA in Crime Fiction Writing at University of East Anglia (UEA) in Norwich, UK. At the time, it was the only creative writing program focusing on crime fiction in the world. I was immediately interested, but I no sooner discovered its existence than I dismissed the course as impracticable and unaffordable for me in the United States. But for the next four years, I periodically revisited the UEA site and fantasized.

The discovery also set into motion an intermittent exploration and daydreaming about, what I initially thought, were more practical, low residency MFA programs closer to home in the United States. Off and on, over the course of a couple of years, I created a massively detailed comparison spreadsheet of pertinent writing programs. From time to time, I added to it with the results of my investigations– answers to questions I’d emailed to directors and alumni, notes about conferences I’d attended on various campuses, and even a meeting with a recruiter.

Gradually, I let go of preconceptions. You might suspect that I rationalized my initial intention. Maybe. But when I eventually analyzed and compared costs and did cold hard financial calculations, I came to an unexpected realization. UEA’s MA in Crime Fiction Writing was not more expensive than an American MFA; it was less. And it might be the best fit for me for a number of reasons:

So, I applied to UEA, was accepted, figured out how to pay international tuition, get a short term study visa, and travel to Norwich.

UEA’s MA in Crime Fiction was the right decision for me.

The required fiction reading, literary criticism reading, and analytic writing were excellent. The creative writing module was excellent. Faculty (tutors) were excellent and possessed deep and broad knowledge of crime fiction. Classmates were talented and hard working and generally all-round excellent people who were a joy to be around.

Attending was not only a taste of study abroad and a chance to travel, it was also a surprisingly interesting and satisfying chance to experience another culture.

After the first semester of the two years, the pandemic hit and residentials became entirely virtual. Which worked pretty okay for classwork (other than the time differences around the world. The morning session began at 5am Eastern for me and my classmate in Japan ended the last session of the day at 3am Japanese time). Online wasn’t quite as satisfactory for socializing. My classmates and I were sad that we couldn’t see each other in person for lunch and dinner and tea breaks and hanging out during residentials. We couldn’t get to know the cohorts in front of us or coming up behind us. Fortunately we’d established a WhatsApp group before the pandemic and we instituted monthly zoom socials. But it wasn’t the same.

On the other hand, surprisingly, most of us agreed that it was great to be on the course during the pandemic–it gave us something to focus on other than the garbage fire that was the current state of the world. It gave us goals and filled the hours spent confined at home. As hard as it was to concentrate sometimes during the pandemic, my guess is, it would have been even harder to manage to juggle the coursework with life and work in normal busy times. So, an unexpected pandemic silver lining!

The coursework is substantial and a bit shocking if you’ve been out of school for a while as most of us had, but manageable. The final project is a complete crime novel that has been written and workshopped over the preceding two years. Also manageable.

For more info, check out my uncomprehensive twitter list of UEA MA in Crime Fiction alumni, current students, faculty, and guest lecturers, or tweet or email me any questions.

The Walk Home at Midnight

Being included in this anthology is probably the most badass I will ever be (which isn’t very).

My short story “The Walk Home at Night” is contemporary rural noir. It’s about a girl on country back roads at the dead of night, a stalker, and other dangers.

I loved writing it and I hope you enjoy reading it.

Recoil (Shotgun Honey Presents, volume 4) is available in the US, UK, and elsewhere through these outlets: